Jeff is a kind and compassionate man who loves animals. At the time of his arrest in 1991 he was caring for a cat that was recovering after someone had cut its tail off: it was starting to respond to his patient approach. On death row he helps wildlife when he can. For instance, one cold morning he found a young, almost lifeless bird in the recreation area; he held it under his coat until it was warm enough to flap its wings and fly away, to Jeff’s immense joy.
Another time he rescued a stray cat that was too badly injured to be saved. As he coaxed it into a box, to be removed by the prison authorities to its inevitable fate, Jeff was overcome with sadness. He identified only too well with that cat which trusted him, as he had trusted the justice system: he felt that he was betraying the animal, as justice had betrayed him. The sadness stayed with him for many days.

Jeff is also an intelligent and articulate man who threw himself into reading law books because he felt that his legal representation at trial was inadequate. As Jeff explains:
“I guess I just took matters into my own hands and decided early on that if I had to go, then I would go KNOWING in my heart that I, not the lawyers, had done everything possible, which I can thankfully say that much was accomplished. I mean it would be SOOO much more difficult to understand that I had to die for a mistake caused by my lawyers. I go KNOWING that I have done everything humanly possible, and actually then some!”
Jeff used the legal knowledge that he acquired to help several other death row inmates to meet important deadlines that if missed would have prevented them from appealing their sentences.

Sometimes there are good moments, even on death row. For instance, early in 2015, when snow fell in Ohio, Jeff was able to go outside three times while snow was on the ground. Each time he was moved by the experience:
“JUST CAME BACK IN FROM OUTSIDE!!!!! 🙂 It sure is nice out there!!! Some of the snow piles were to my waist though!!! I just kicked the snow as I was walking to make myself a path!!!! It’s 20 degrees so that’s not bad considering I have PLENTY of clothes!!!! Just walked around, looked up at the sky and watched the clouds… ”
“Simply listened to the quiet!! I heard tires humming on the freeway, the dripping of water because it was 39 this time out, and a dog barking some, and then some starlings doing their thing. I just sat on the picnic table and enjoyed the sunshine!!! There was plenty of that this time. It’s just so peaceful…”
“It was snowing sooo hard for about a half hour and I totally enjoyed being out in it!!! Just watched the snowflakes drift down as free as could be! Just like when I watch the birds fly!!! All so very simple things in life I NEVER took the time to enjoy before. However, NOW I DO!!!!…”

But at other times Jeff experiences despair:
“It is VERY VERY VERY difficult to accept that I have to die for something that I did NOT do, but that is why I devoted ALL my efforts during the course of my appeals. I just will never understand why life has gave me this ending. I will NEVER understand it. It just makes me sad and hurt inside.”

You can send Jeff an email of support via the JPay website. His inmate ID # is A269357. 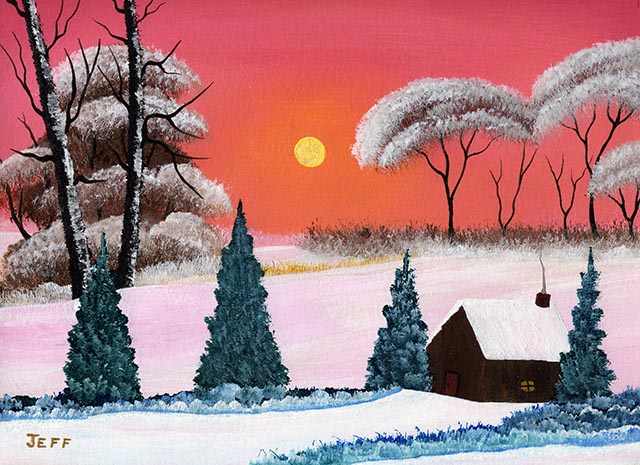